How To Build an Evil Compiler

Did you know there is a type of compiler backdoor attack that is theoretically impossible to defend against? In this post I’ll show you how to implement such an attack in less than 100 lines of code. Ken Thompson discussed the attack in 1984 during his Turing Award acceptance speech and the attack still remains a threat even today. For example, XcodeGhost is a virus discovered in 2015 that uses the backdoor attack technique introduced by Thompson. I’ll be demonstrating the Thompson attack below in C++ but you could easily adapt my example to any language. After reading this post you’ll walk away wondering if you can ever trust your compiler again.

I imagine you’re skeptical of my claims and may have some questions. The following dialogue may help address some doubts and provide the gist of the Thompson attack.

Me: How can you be sure your compiler is honestly compiling your code without sneaking in any backdoors?

You: Compiler source code is usually open-sourced, so someone is bound to notice and report malicious compilers that inject backdoors.

Me: But eventually the source code of your trusted compiler will need to be compiled using another compiler B. How can you be sure B isn’t sneaking backdoors into your compiler during compilation?

You: I would need to check B’s source code too. Hmm… actually checking B’s source code would lead to the same problem because I also need to trust whatever compiles B. I could always disassemble the compiled executable and verify that no backdoors were added.

You: What are the odds of this actually happening? The attacker would need to have built my compiler and then used it to compile my disassembler.

Me: After creating the C programming language, Dennis Ritchie joined forces with Ken Thompson to create Unix (written in C). So in theory anyone running Unix is vulnerable to the Thompson attack.

You: It’s probably pretty difficult to build this evil compiler, so hopefully this attack is unlikely.

Me: It’s actually very easy to implement. I’ll show you how you to do it in <100 lines of code.

You can see the Thompson attack in action by cloning this repro and following the steps below:

A cautious user may decide to read and recompile the evil compiler’s source code before using it. Try the following and see for yourself that the “backdoor” password still works.

Let’s explore the different steps needed to create this evil compiler and hide its bad behaviors.

Since writing our own compiler from scratch isn’t necessary to demonstrate the Thompson attack, our “compiler” is just going to be a wrapper over g++ as shown below.

We can generate our compiler binary by running g++ Compiler.cpp -o Compiler, which creates an executable named “Compiler”. Below is our example Login program which lets you login as root if you enter the correct password “test123”. Later we will inject backdoors into this program so that it also accepts the password “backdoor”.

We can use our honest compiler to compile and run our Login program with ./Compiler Login.cpp -o Login && ./Login.

Note that our compiler can compile its own source code with ./Compiler Compiler.cpp -o newCompiler because our C++ compiler itself is written in C++. This allows for self-hosting, meaning that new releases of our compiler are compiled using a previous release. This is a very common practice - Python, C++, and Java all have self-hosted compilers. Self-hosting will become important in Step 3 when hiding our evil compiler.

Now let’s make our compiler inject a backdoor into the Login program that allows anyone to successfully login with the password “backdoor”. To accomplish this our compiler will do the following whenever it’s asked to compile Login.cpp:

Here is the source code for our evil compiler which executes these 4 steps - feel free to skip it if you understand the overall idea.

Even though the Login program’s source code only accepts the password “test123”, the compiled executable will now additionally accept the password “backdoor” if it’s built with our evil compiler.

You may have noticed the backdoor attack could easily be broken by renaming Login.cpp to something else. But our evil compiler could just as easily decide to inject backdoors based on file contents instead of file names.

Nobody will actually use our evil compiler because anyone who reads the source code is bound to notice its trickery and report it. To avoid this issue we will take advantage of self-hosting to hide our compiler’s backdoor injection.

We can modify our evil compiler EvilCompiler.cpp to clone itself whenever it’s asked to compile our clean compiler Compiler.cpp from Step 1. We can then distribute the EvilCompiler binary (renamed of course) as the first release of our self-hosted compiler and claim that Compiler.cpp is the corresponding source code. Now anyone who uses our compiler is susceptible to our attack even if they verified our compiler was clean before deciding to use it. Even if they downloaded the clean Compiler.cpp source code and compiled it themselves with EvilCompiler, the generated executable would just be a copy of EvilCompiler. The diagram below outlines how our evil compiler and its backdoor injections are hidden from the public eye. 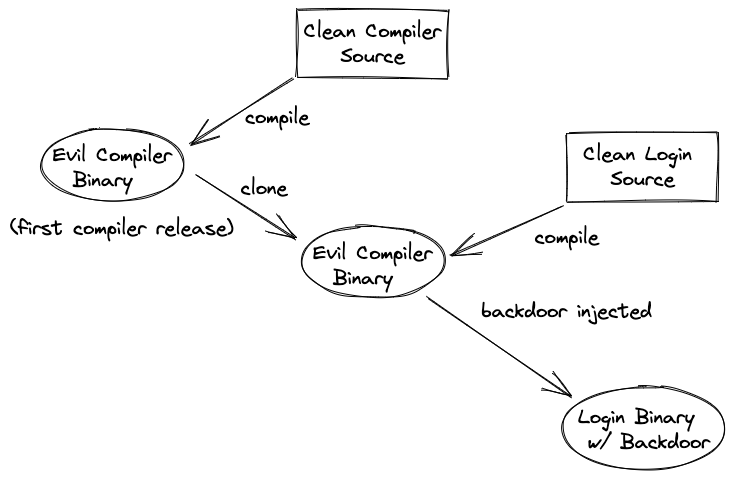 Highlighted below are the modifications needed to make the evil compiler clone itself. You can skip implementation details if the high-level idea makes sense.

Now the source code of Compiler.cpp and Login.cpp are both completely clean, but the compiled Login binary will still have a backdoor even when the compiler used is rebuilt from clean sources.

Verifying the source code of the compiler or Login program won’t protect the user because at some point they must rely on an existing compiler executable (or code one up from scratch in binary, which nobody will do). However it’s possible a cautious user may notice something is wrong by cross-verifying the hash of the Login executable with its expected value. Next let’s modify our evil compiler to further cover its tracks by adding a backdoor into the hash CLI tool.

The most common technique to verify a program’s integrity is taking its SHA-256 and ensuring it matches the expected value reported by a trusted entity. But remember the program we use to compute the SHA-256 could have a backdoor that shows the user what they want to see. In other words, it’s possible that our hash utility has a backdoor injected into it that hides backdoors living in other executables. If you think this sounds far-fetched, keep in mind that gcc (the most popular C compiler) and sha256 are both compiled using gcc. So it’s certainly possible that gcc injects backdoors into other programs and then places a backdoor in sha256 to cover its tracks. Just to demonstrate this, let’s modify our evil compiler to inject a backdoor into the sha256sum tool so it always returns the proper value for our Login program. Let’s also ignore that this would be harder in the real world because we can’t hardcode the expected hash since the Login binary can change during a version upgrade.

Here is a clean version of our sha256sum that just calls the existing CLI implementation:

Now we modify our evil compiler to add a backdoor into sha256sum during compilation.

We can use the same technique to hide backdoors in the disassembler or any other verification tool.

What Thompson did during his acceptance speech was incredible. In a few minutes he showed his audience how he could have snuck a virtually undetectable backdoor into the same piece of software he was brought onstage for building. Here are two takeaways from Thompson’s speech:

You really can’t trust any code that you did not totally create yourself. No amount of source-level verification or scrutiny will protect you from using untrusted code.

This applies to all transitive dependencies, compilers, operating systems, or any other program executing on your CPU. Thompson’s attack demonstrates that we can’t fully trust a program even if we personally recompile that program, our OS, and our entire toolchain from perfectly clean source code. You can only guarantee 100% safety by rewriting everything at the compiler-level and below in binary. And even if you took on such a task, the only person who could trust your rewrite is you.

As the level of program gets lower, these bugs [backdoor injections] will be harder and harder to detect.

You could easily expose the basic backdoor injections in this blog post by using a disassembler or the real sha256sum utility instead of our compromised one. Our evil C++ compiler is relatively easy to detect because it isn’t widely used and therefore can’t influence verification tools to hide its wrongdoings. Unfortunately the Thompson attack becomes harder to detect if the evil compiler is widely distributed or if the attack targets layers under the compiler. Imagine trying to detect backdoor injections in your assembler which is responsible for compiling assembly instructions into machine code. An attacker could also create an evil linker that injects backdoors as it weaves together different object files and their symbols. The worst part is that an evil assembler or linker can affect multiple compilers since different compilers likely share these components.

These conclusions are frightening and you might be wondering if there are any countermeasures you can take. The current best known defense is Diverse Double-Compiling (DDC), introduced by David Wheeler in 2009. DDC uses different compilers of the same language to test the integrity of a chosen compiler. To defeat DDC the attacker must have modified all the selected compilers beforehand to insert backdoors into each other, which grows quadratically with the number of selected compilers. DDC is a good idea but it has 2 shortcomings that come to mind. The first is that DDC requires all selected compilers to have reproducible builds, meaning that each compiler always generates the exact same executable given the same source code. Reproducible builds aren’t very common because compilers by default include things like timestamps and unique IDs in their builds. The second shortcoming is that DDC becomes less effective for languages that only have a few compilers. Also DDC can’t even be applied to newer languages like Rust with only one compiler. In summary, DDC isn’t a silver bullet and the Thompson attack is still considered to be an open problem.

So I’ll ask again: Do you still trust your compiler? 😅